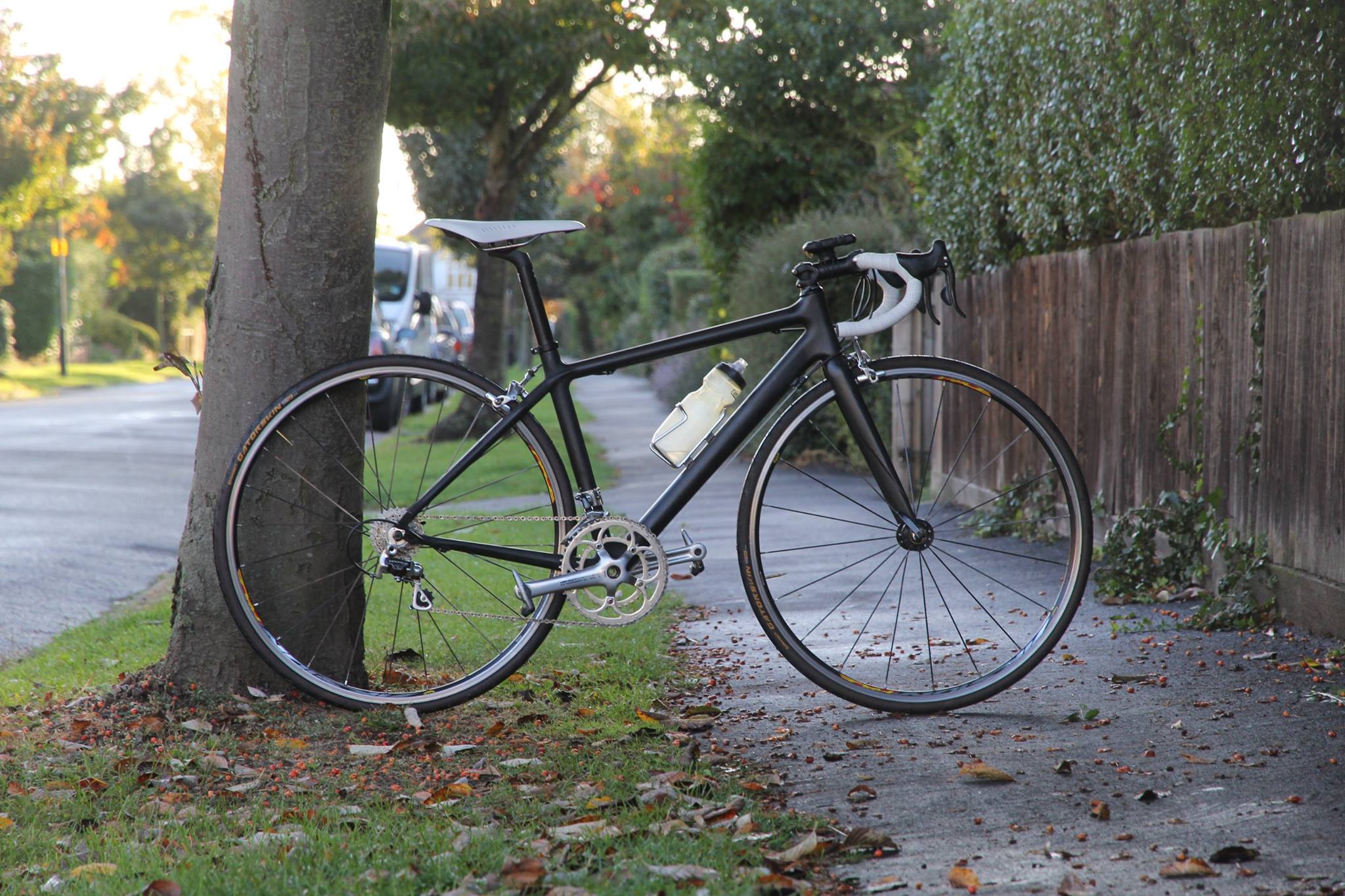 Last weekend I completed my entrance into road cycling. I have defined myself as a Cyclist for a couple of years now, having committed to full lycra, Oakley’s and shaved legs. This was, however, the final, arguably most important, artefact required; a full blooded road bicycle.

I have a long list of excuses as to why my forays into cycling had thus far been restricted to bike of the fixed gear variety. This can be reduced to something like the the fact that fixies are:

There has been little motivation to invest the disproportionally large amount of my income needed to acquire a satisfactory road bike. A suitable frame turned up at the faithful LBS and I couldn’t say no. The incremental acquisition of parts has meant that n+1 prevails and I am now in possession of a lovingly crafted, carbon fibre cycling machine.

Getting out for the first ride was fun. Of course, after months of anticipation I had high expectations. And they were certainly met in terms of pure performance. It weighs in at around 15kg according to some dodgy luggage scales, so about as much as my steel commuting fixie. The addition of gears, brakes, derailleurs etc adds a fair bit so this is more impressive than it sounds. I was relieved to be whirring round the countryside on a bike that didn’t look like a toddler had attacked it with neon poster paints, something many modern road bikes seem unable to avoid.

My main expectation was that riding would be easier, yet faster. Normally I have to go all out on a fixie to keep the cadence manageable as I grind up what counts for a hill round here. Of course going down the other side results in peddling speeds that can easily be described as manic, I have hit 180 rpm slingshotting round a mate.

Riding a road bike caught me out in that it made cycling harder. While there was the option of shifting down on the hills, this meant the climb lasted longer and I didn’t even get the satisfaction of setting a new PB. I have always been in favour of short, intensely painful bursts of exercise. If it lasts longer than a minute I get bored and stop. On the downhill, instead of allowing the pedals to drive my legs round, I could find higher gears and actually put in power – going down hill can actually take more effort if you are trying to go as fast as possible. Which of course I was at all time.

In the past my cadence and effort level waxed and waned with the landscape. My training programme had been completely dictated by the gradient of the road and force of the wind. This makes some parts hard but means a lot of time on the flat is spent at a comfortable, efficient rhythm. Riding a road bike that has many gears means that there is always the option to go faster. The smooth press of a lever instantly allows for a greater power output and greater speed. This is not something that I have been able to deal with straight away.

A couple of rides in, I am getting the hang of pacing myself. It is much more apparent why experienced Time Trailing specialists, like Bradley Wiggins or Tony Martin, must focus on precisely how much effort can be put in. A power meter must be a useful tool in such a situation. But I refuse to over quantify my riding, using Strava as a rough indication of my fitness is more than enough. I must therefore begin to hone the self awareness required to maximise average speed over varied terrain. I must also maintain the discipline to stay in a high gear when tackling hills if I am to beat any records set on a fixed gear bike, where freedom is removed.

Pacing myself is a skill that will soon become unimaginably important. After owning a road bike for less than a week I have signed up to ride the Stelvio Pass. This is a road truly worth of the word “epic”. There is only one European mountain pass higher than its 2,758m high summit.

When I was asked, out of the blue, if I wanted to accompany a school friend on the trip I immediately rejected the notion as absurd. On close examination I couldn’t actually find a reason to say no. So I said yes. Why not set a goal? Without one it will certainly not be possible to sum up the required motivation to get out and train over the forthcoming winter. But this is a challenge that I already fear is too great. Climbing 3,000m over the 140km course will only be possible if I drastically change my physique and increase my power output. I’m more than a little scared.

The coming months should prove interesting. While my personal future is uncertain, having such a looming task ahead may help to focus my cycling. This is going to be one hell of a steep learning curve.