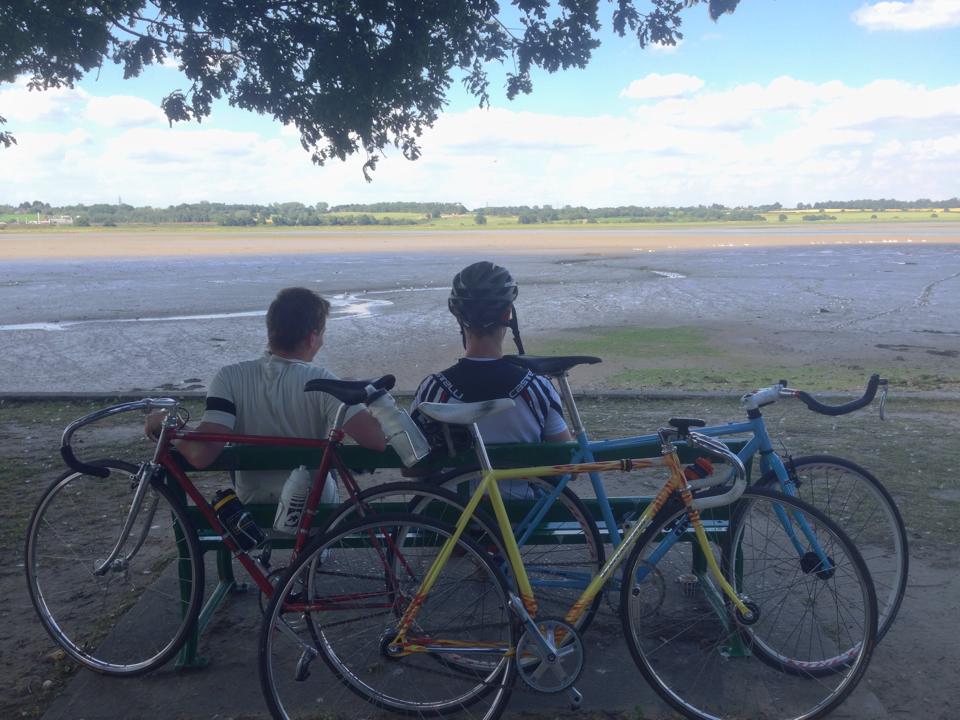 Last weekend I got some of those clippy-in cycling shoes. I guess it’s surprising its taken this long. I’ve been using fixed gear bikes as my main form of transport for the best part of 5 years but the last summer has signalled a decisive turning point from hipster courier to hardcore roadie wannabe.

I think its fair to say that to begin with the building of a fixed gear bike was as much about the novelty of building a unique bike choosing all the shiny parts as it was about creating a machine that could swoop round traffic jams. It was the sensation of riding that really struck home, not long after my first complete build (and more than a few upgrades) I embarked on a more ambitious project. After 8 months of meticulous planning and the consideration of a multitude of factors I created a bike that was perfect in every way. It still hangs on my bedroom wall when not being ridden. This was my fully NJS Panasonic keirin bike. A custom steel frame built up with classically styled Japanese parts designed and certified for use in the notoriously combative tack discipline of Keirin racing. It is still my proudest achievement to date. This showed a marked step away from the aggressively urban style of bike I had started with and was more purist in the sense that it was designed to have a dramatic effect on all the senses. The aesthetic impact was carefully considered. It is a very beautiful bike to look at. Being fixed gear allows for a beautifully responsive and smooth acceleration as well a ride that subtly melds mind, bike and asphalt. The contact points between body and bike are taut with power and an awareness of balance and motion. The overall experience is sublime but the point is that performance was not the primary object here. This was very much a conscious decision. When choosing to go for classic track pedals with metal cages and leather straps this was to keep with the traditionalist approach. I am still in love with the pedals, they turn slickly and look stunningly minimalistic but admittedly do not offer the full level of efficiency that more modern components are capable of. Also, I had no intention of waddling around

The conscious decision to prioritise performance over looks is almost certainly due to time spent in the gym over the last year and a half. An interest in fitness lead me to experiment with High Intensity Interval Training. It’s amazing. The sheer quantity of pain that is achievable on a spin bike is astounding. It made exercise addictive. It was an incredibly easy and enjoyable way of achieving the physiological overload, the mental buzz, the burning body, the breathless grin that made cycling so much fun outside. The ease at which I was able to stick in a pair of headphones playing drum and bass on full volume and then convince my body that it was still capable of producing more power and pain week after week was a revaluation. Having never been a particularly athletic person I loved that for the first time in my life I was doing exercise and getting fitter. The gym offered an environment with no distractions and clear objectives so progress was quick and quantifiable. Even more amazingly this progress transferred to the real world. I found I could effortlessly cruise for longer and longer. When I got to the biggest hills Cambridgeshire has to offer (admittedly these are little more than lumps) my legs simply kept on outputting power all the way up and down the other side.

My third and final year an university also included a number of unrelated factors that influenced the change of direction. Last winter my beloved first build tragically and catastrophically failed as the result of a seemingly benign accident. The replacement, chosen by necessity more than anything else, was constructed around a much more modern Leader frame. Salvaging a large number of parts from the corpse of my old bike gave it a rather jarring contrast of modern and classical styles. Moving out of London eventually allowed me to prioritise speed over survival so it ended up with a pair of contemporary drops to go with the retro saddle and pedals. But of course a student budget limited advancements. Studying, or rather, procrastinating gave me the time and motivation to sink my teeth into watching road racing for the first time. Having gotten the hang of causing myself pain on a bike I started to appreciate the tactical masochism of the pro peloton.

It would seem that a few months of watching men and women wearing sweaty lycra has also had an impact on my fasion sense. Hours of watching sweaty men and women (note: there isnt much womens pro cycling, let alone on TV) in lycra meant I didn’t think it looked as bad. this summer I got my first proper cycling attire. It was not an easy choice but the time I was clocking on the bike required clothing fit for purpose. It just so happens that I think my Rapha Classic jersey and bib shorts look amazing. At last, despite my wardrobe ready consisting only of cycling optimised “casual clothing” (all my jeans are from Levi’s commuter range), I can proudly don kit that is without compromise. It’s so comfy its hard to take off after a ride.

The culmination of these various influences and constraints has certainly shifted my focus in the direction of a performance obsessed road cyclist. A moderate commute to a new job provided the need and means to switch to cleated pedals and shoes but it was a switch I was very excited to make. And once made (at the same time as replacing a very worn drive train) I re-lived feelings that got me into cycling in the first place. The clips allow for so much more power to be squeezed onto the tarmac and the contact with the bike creates an even stronger sense of symbiosis. This reached, for me, completely new heights whilst dodging bike traffic going across Cambridge’s parks. Heading off road to dodge pedestrians is so much fun when clipped in, the undulating bumps and bounces mean you just flow with the bike as one wheel and then the other tries to regain contact with the ground. The clarity of motion as the peddles wind up and the combined speed of person and machine flow through the air is sensational. Its certainly the case that paying a bit more attention to the scientific side of cycling doesn’t detract from its intrinsic emotional excitement. Cycling offers the astounding opportunity to value outright speed and performance yet when these are achieved or even reached at you keep on having a better time.