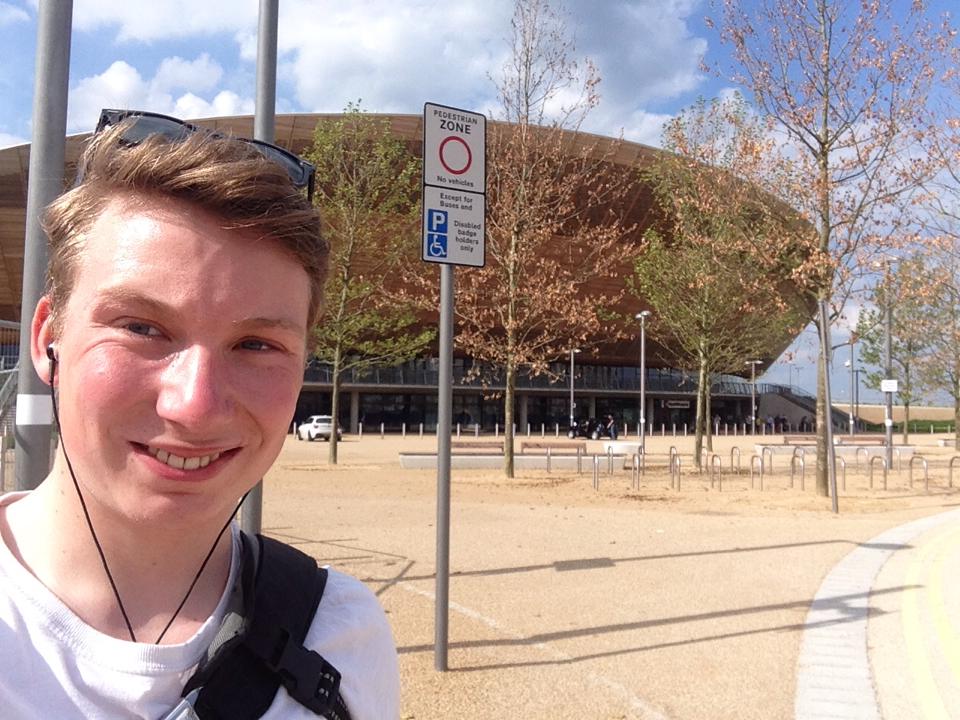 Way back in June I went out on the boards for the first time. I’ve ridden fixed gear bikes for more than 5 years, both for daily commuting and longer fitness rides. I can skid, track stand and get a high gear up to speed pretty quickly. I have even own a full blooded track bike for several years without riding on a track. My trip to the London Olympic Velodrome was long overdue and become something of a pilgrimage.

The first stop in London was the Rapha Cycle Club, where the first of many coffees was consumed. Bike kit was purchased. A stage of the Giro and the latest edition of Rouleur were also absorbed before heading relocating to Speakeasy to top up the caffeine levels. By the time I headed out of central London, towards the Olympic Park, I was vibrating.

I was never into sports as a child. I didn’t get the idolisation of football players or other celebrities. In recent years I have started paying attention to professional track and road cycling. The extent to which I have invested myself became astonishingly clear on entering the track. Already buzzing off countless espressos there was an additional burst of adrenaline. Watching Chris Hoy and Victoria Pendleton power round the track at the 2012 Games was the first time I related to sport while watching it on TV. Stepping into the arena in which they had triumphed was awesome. I was also slightly embarrassed at how sentimental I found the whole scenario.

Getting over my fanboy “wow” moment was only possible because of my bemusement at the proportion of the track. It seemed oddly small. Out on the road it takes no time to cover distances so a 250m track shouldn’t have been pictured as a gargantuan loop. Competing in such a compact area, crowds pressing in from all sides must have been intense. After this the “taster” session started pretty much as expected, although all the other cyclists in attendance were men, and wearing enough cycling kit to presume some experience in the sport.

As expected, the session was very much aimed at complete novices. A thorough safety briefing, covering all aspects of riding a fixed gear bike followed. I had anticipated this, and the talk was punctuated with a few, clearly very standard, jokes. I just able to keep my impatience in check and stop my self from tearing right onto the track. After half an hour we still hadn’t been allowed to ride on anything that was wooden, or not completely flat.

Once we got onto the wood, things picked up pace pretty quickly. Each lap, our circuits would move a meter closer to the edge of the track, working out way from the low inside of the corners to rounding the bends right up by the barrier in a matter of minutes. This was a very straight foreword progression. You carry a bit of speed into the corners and lean in. Very easy. Until you look down…

And it was a precipitously long way down. Even though I was only a couple of lateral meters from the inside edge of the track and the flat ground I was several meters above it. This was good encouragement to pick up the speed in the hope of using centripetal force to force the tyres into the track. An effect of the steepness of the corners is that you gain and loose a lot of elevation in a single lap. On the straights the track is a couple of meters higher at the barrier than it is on the inside, to maintain the same route around the track in the bends you have to gain a few meters elevation in a short distance, resulting in a noticeable gradient.

Once we were got the hang of going round corners, regardless of their angle, we were allowed to properly pick up the pace and start over taking each other. A glance up at the board suggested I was doing laps high up the track in around 20 seconds. Twice the time pros do round the black sprinters line which is the shortest route. The short climb from the straight, up into the bend, wasn’t hard in itself, but when you had to do this twice a lap at pace it gets wearing. Doing small climbs every few seconds got tiring pretty quickly. The dry air of the arena, presumably controlled to preserve the Scandinavian pine I was careering round on, added to the fatigue.

After the briefing and frequent stops to ensure the safe progression of the group not long was left for going flat out. Despite this I didn’t feel hard done by when we were called in. I’d managed to wear myself out pretty quickly, I had maintained my pride in not being over taken at all. The caffeine high may also have been about to take a nose dive steeper than the corners of the track. The experience was not quite on the point of being overwhelming but it was completely absorbing. And that was just going round in a circle, without really going full speed.

Somehow I have yet to relive this communion. Excuses about the convenience, availability and cost of using the velodrome spring to mind. Having had an incredibly productive summer riding on the road is some consolation. While I doubt that the track offers enough variety to truly replace riding on the road, racing in such an environment would be simply immense. While not being my main focus, I will be disappointed if I fail to take my track cycling career any further.