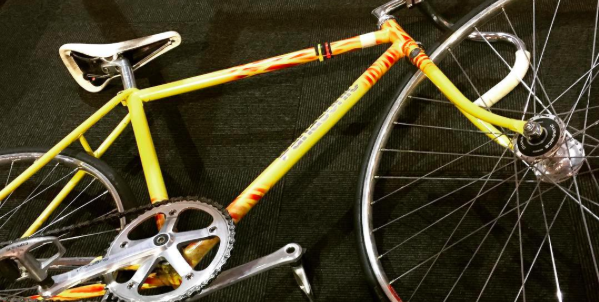 Track cycling sprint events are tough. These are the high speed, short duration events that only enter the public consciousness once every four years during the olympics. How many of you could actually name all the races Chris Hoy has won? While this is an obscure,and seemingly pointless discipline, I have decided to have ago at it. I now decree it to the the hardest sport there is. (note: I have done very few sports so this claim is essentially pointless).

Track cycling sprints events require you to be an absolute beast at almost every type of fitness. Even more annoyingly, putting effort into training one kind of fitness will inevitably come at a cost to another. So it’s a constant balancing act. You have to tread a fine line, testing, training and improving each type of fitness, pushing as hard as you can while being mindful of the potential consequences elsewhere. The result is that the worlds best track sprinters approach a god-like level of fitness as they have to do all of the following:

Strength – every day is leg day
This is one of the first things you need to be good at to be a track sprinter.

All that muscle is needed to push stupidly high gear ratios from a stationary start up to speeds close to 50mph where the air starts struggling to move out the way in time. Having some serious lower body strength is the first prerequisite of track sprinting. High weight low rep exercises are a staple, with the pro’s using all conceivable variations of the squat and deadlift.

So you need strength, but you also need much more than that. Unfortunately lifting heavy weights in the gym all day won’t be enough to make you a competitive track sprinter as doing this will result in pretty poor performance everywhere else.

Anaerobic fitness – it’s a lung buster
This is another fairly obvious one. In the gym, you might do 5 or 10 reps. But on the track you need to keep the intensity up for a lap or two. This feels like your legs are creating enough lactic acid to burn through a sheet of steel. Building this kind of fitness is simply brutal. It requires many repetitions of the kinds of efforts that make you seriously doubt the oxygen content of earths atmosphere. Attempting this kind of self imposed torture on a regular basis is not going to do your body any good. You’ve got to train hard enough to improve performance, but not so hard as to do permanent damage.

Aerobic fitness – take a deep breath
Obviously a bit of aerobic fitness is going to help too. The better your fitness here, the later your body is going to shift to anaerobic respiration. Most sprint events actually start off at relatively low speed – it would be insane to go flat out for more than a lap or so, meaning no-one actually does. From the close marking of the match sprint, to the steady windup of the keirin, to gaining height for a flying 200m, a base level of aerobic fitness is still essential. Admittedly, serious track cyclists would only spend a few hours a week training for this, but every one of these hours is going to count against those gym gains.

Explosiveness – it’s the bomb
Track cycling isn’t just about being strong and being able to maintain a stupidly high power out put for longer than should be allowed by the Geneva Convention. You also have to be able to put out power quickly. Unfortunately, lifting super heavy weights isn’t going to help your legs move quickly, it just helps them keep moving when theres a ton (or at least a few hundred kilos) of resistance. According to the laws of physics, power is equal to force multiplied by velocity. So being able put out more force, in less time, means more power. Unfortunately pure strength training won’t always promote this. It’s tricky one to train, although it normally involves various types of jumping activity, or getting on your bike and trying to accelerate as hard as possible. This training is just hard ‘cos you have to go flat out again, and again and agin.

Low cadence technique – we’re just getting started
Track bikes have one gear. Your “cadence” is the revolutions per minute your feet do on the pedals, and obviously you start at zero. You have to push down on one pedal with far more force than is opposed by your body weight. Pulling up with the other pedal helps, but doing so, without toppling off completely takes more than a little bit of balance. Imagine putting out all the force of your max squat, though each leg at separately , without anything stable to push against. Keeping both wheels on the ground (and the right way up) is hard. Practicing this feels like yet another gym workout because the gear is so bloody hard to push against. You also need good core strength to deal with the stupidly unbalanced load, and if you try pushing or pulling when the pedal is in slightly the wrong place it all goes tits up.

High cadence technique – you’ve got to spin to win
Human legs are not designed to go round in a perfect circle. If you have a gear that’s low enough for reasonable acceleration, your legs will be all but a blur when you hit top speed. Generally track sprinters aim for a cadence from 130 to 150. So that means moving each foot in a circle around two and a half times a seconds. You can practice this to a certain degree using a lighter resistance, spending a much time as possible with your legs whirring like wasps wings. But this will start undoing all that gym work (again). If you do, meaning you have to do more strength training, you are drastically changing up the structure of your muscles, and how your brain activates them, meaning they’ve forgotten how to spin properly by the time you’re back to your squat PB.

Low body fat – less weight = more speed
Ok, this one is relative, but as always, it’s achieving progress in one area without loosing ability in another that makes it a hard. Force equals mass times acceleration, so if you weigh less, but can output the same force, you go faster. Generally speaking, you need to eat more than you are burning to build muscle which normally results in accumulating some fat. The goal here is to keep that fat to a minimum without also loosing some of those hard earned gains. Track sprinters don’t (normally) look like pure physique competitors, but they are far from chubby. Of course, if you are doing all of the training mentioned here so far, it starts becoming a real challenge just to keep fully fuelled so actually eating enough can start to be problem, or at least keeping it down after some of those hard efforts.

Tactics – brute force and stupid speeds
This one is worthy of several essays of discussion by itself. But track sprinting, as with all cycling, is hinged on a simple paradox. To win, you have to be in front, but when you are in front, you are helping the competition. By pushing through the air for them, allowing your rivals to save a huge amount of power, generally around 20-30%. So no-one wants to be on the front until right at the end. Then suddenly, everyone really wants to start being at the front. Jostling for position at this point, turns track sprinting into something of a contact sport – at 40 mph. That’s why Japanese kern riders wear body armour. Think speed chess on steroids, trying to force your opponent into vulnerable positions, and then exploiting the slightest advantage in position with power outputs that could light up a small town.

Having now tried to improve in all of these areas for a couple of months now, it’s safe to say I have an increased admiration of Olympic athletes. So far, simply attempting to try and improve in each of these areas has left my legs in a state of shock and agony at the end of each week. But I am getting faster. I think…